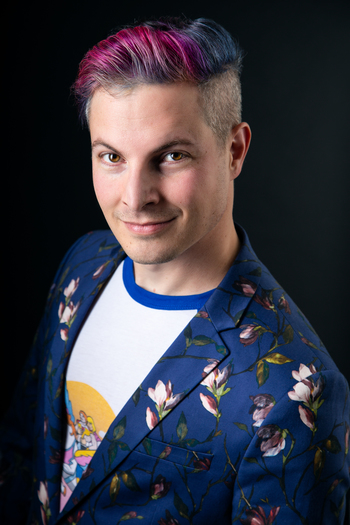 Voiceover actor, writer, and snappy dresser, JP is the voice of Boss Baby in The Boss Baby: Back in Business and Dante Crescendo in Trollstopia. He has played such iconic characters as Wile E. Coyote, the Tin Man, Willy Wonka, and a slew of Marvel heroes and villains including Green Goblin in Spidey and His Amazing Friends as well as Loki, the Vision, Hawkeye, Wiccan, and even Black Cat. Anime credits include Kozo Fuyutsuki in the Netflix dub of Neon Genesis Evangelion, S566 in Eden, and roles in Mobile Suit Gundam: Hathaway and Millennium Actress. On the interactive side, notable credits include N. Tropy in Crash Bandicoot 4, Junkbot in Ratchet & Clank: Rift Apart, and Wolfgang in the Skylanders series. When not doing voices, JP is an advocate for LGBTQIA+ representation--both for characters on-screen and actors behind the mic--founding Queer Vox in 2021, a pay-what-you-can training academy, community, and advocacy group for queer voice talent. Also a political junkie, JP and pal Courtenay Taylor are co-founders of the non-partisan organization NerdsVote, linking cosplayers, gamers, con-goers, and pop culture fans of all kinds to voter registration opportunities. Hailing from the "Electric City," Scranton, PA, JP enjoys pie, dogs, his partner Scott, and pie.