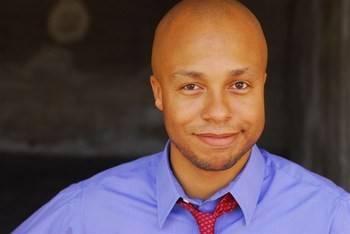 Lauded for his vocal dexterity, Arif is one of a handful of African American's who have made his mark in the video game industry, rising to fame with recurring roles in the Volition/THQ series “Saints Row” and the cult hits The Suffering: Ties That Bind & Tony Hawk: Downhill Jam. He
has also garnered recognition for his work on the animated hits “MAD” “Beware The Batman” and “Family Guy”. In addition, he also specializes in the art of "speed talking" and has done ADR looping in Academy Award© winning films such as “Happy Feet” “8Mile” and “12 Years A Slave” . He’s voice matched celebs like Martin Lawrence for "Bad Boys 2" and the late Bernie Mac for "Guess Who".

Mr. Kinchen’s acting and voice-over characterizations have afforded him a career in the advertising industry with hundreds of commercials and campaigns for numerous clients including popular spots for Boost Mobile, AT&T, Lowe’s, Sears, Intuit and 1-800-The General : Car Insurance. He's also been heard in promos for Tyler Perry’s “House of Payne” & for the NBC network.

While acting is his primary passion, Arif also has strong ties to music and the West Coast Hip-Hop community. He released his own independent album in the early 2000’s to great reviews. Kinchen has also served as Music Coordinator and Artist on films and numerous TV shows.

In the last decade, the man with the distinctive voice has embodied characters for numerous AAA video game titles (BioShock Infinite, GTA V, Dead Rising 3, Gears of War 4, Mafia III) plus the indie hit “Marlow Briggs And The Mask Of Death” (whose title character he voices). He’s also involved in several animated projects, including Cartoon Network’s Transformers: Robots In Disguise as the LEGENDARY Autobot “Jazz”.

Since 2015, he can be seen weekly as an On-Air Host on the SiMS Entertainment Group’s
@apollonightLA via ApolloNightLA.com. Arif S. Kinchen currently resides in Los Angeles, CA, with his wife and their 2 children.